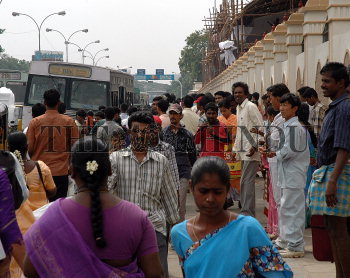 Caption : COMMUTERS waiting for the MTC bus in front of Government General Hospital in Chennai on June 27, 2005. The bus shelter was removed due to hospital expansion programme causing inconvenience to the COMMUTERS. Photo: K.V. Srinivasan