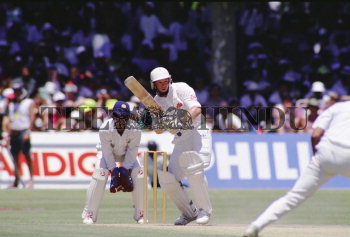 Caption : South Africa's Jonty Rhodes looks on after striking a ball from Anil Kumble, watched by wicketkeeper Kiran More, in the fourth and final cricket Test match between India and South Africa at Cape Town in South Africa on January 3, 1993. Photo: V.V. Krishnan