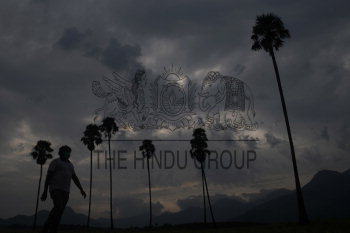 Caption : PALAKKAD, KERALA, 31/05/2020: A cloud laden sky at Kava near Malampuzha dam catchment area at Palakkad on May 31, 2020. The India meteorological department (IMD) predicts that South West monsoon is estimated to set in the state on June 1 it self, as against earlier reports of monsoon reaching the state on June 5. It said that this is in view of likely formation of a low-pressure area over southeast and adjoining east central Arabian Sea around May 31. According to the IMD forecast, monsoon is likely to be normal this year. The country receives 75 per cent of its rainfall from the southwest monsoon during June to September. It is not only crucial for farming in the country, but also for replenishing reservoirs, and more importantly to the economy which is still largely dependent on agriculture. Photo: K. K. Mustafah.