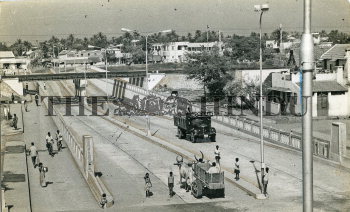 Caption : The sub-way at Kannammapettai, between Mambalam and Saidapet Railway stations in Madras, the capital of the Southern Indian State of Tamil Nadu is thrown open to the traffic. A railway overbridge above the subway is seen photographed on February 21, 1974. (Published in The Hindu on September 18, 1956) PHOTO: THE HINDU ARCHIVES