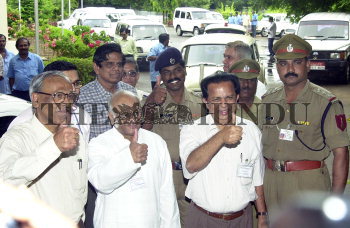 Caption : ISRO Chairman G. Madhavan Nair (2nd right) along with Union Minister of State for Space Satyabrata Mookherjee (middle) and Narayana after Resourcesat was put in orbit by by PSLV-C5 from Sriharikota in Andhra Pradesh on October 17, 2003. The eighth flight of the Indian Space Research Organisation's workhorse launch vehicle, the Polar Satellite Launch Vehicle placed a land use spacescraft, the Indian Remote Sensing Satellite Resourcesat-1 in an 821 km-high polar Sun Synchronous Orbit. The satellite was launched from the Satish Dhawan Space Centre at Sriharikota. Photo: S. Thanthoni