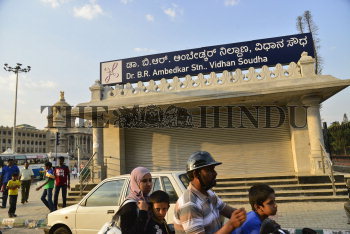 Caption : Karnataka, Bengaluru - 01/05/2016 : One of the Entry and exit point of Dr B R Ambedkar Station, Vidhana Soudha Metro underground station closed for COMMUTERS take Namma Metro train of underground segment of the Namma Metro’s Purple Line, which connects the city’s east and west, by Bangalore Metro Rail Corporation Limited (BMRCL), in Bengaluru on May 01, 2016. This 4.8km underground network on the East - West corridor linking Byappanahalli to Mysore Road Terminal, the two reaches of Namma Metro – Baiyappanhalli to M.G. Road and Magadi Road to Mysore Road – are expected to realise full potential, while also helping COMMUTERS cut travel time by half to reach the other end of the city. Photo K Murali Kumar.