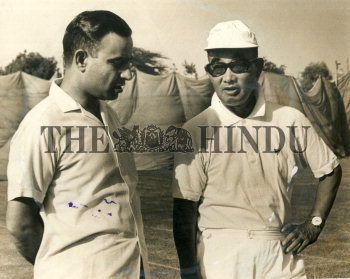 Caption : V. Ohta, Manager of the Japanese team seen in conversation with R. K. Khanna, Secretary, All India Lawn Tennis Association, in New Delhi on the eve of the Davis Cup Eastern Zone final between Japan and India on September 29, 1967. PHOTO: THE HINDU ARCHIVES