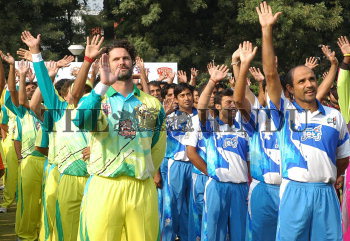 Caption : CHANDIGARH, 29/11/2007: Skippers of Delhi Jets and Chandigarh Lions Marvan Atapattu and Chris Cairns with their teammates during a PHOTO SESSION of the teams in Chandigarh on November 29, 2007. Both the teams will be playing inaugural match of ICL Twenty-20 tournament at Tau Devi Lal Stadium in Panchkula on November 30, 2007. PHOTO: Akhilesh Kumar