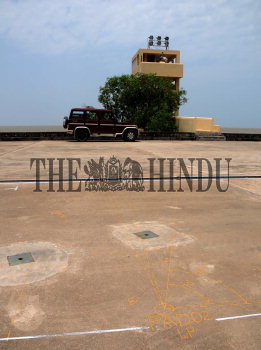 Caption : WHEELER ISLAND, ODISHA, 18/04/2012: Some of the finer markings at the Interceptor missile LAUNCH pad at the Wheeler island where, Agni - V India's longest range ballastic missile with a range of over 5000 kms was sucessfully LAUNCHed making India's entry to exclusive club of ICBM which so far had US, Russia, France and China. Photo: V.V.Krishnan