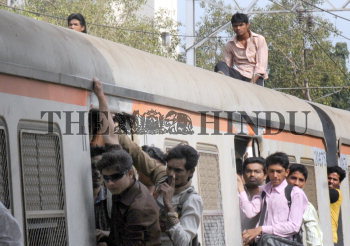 Caption : 10/02/2010 MUMBAI: Commuters travelling during the pick hours on the roof of Western Railway in Mumbai on February 10, 2010 as the Western Railway officials have decided not to let any train leave a station if even a single person is seen travelling on the roof. The decision, which will be implemented from February 28, will coincide with the complete switchover from the present 1,500-volt direct current (DC) to 25,000-volt alternating current (AC) on the Borivli-Virar stretch. Photo: Paul Noronha